Let’s get real… if you’re like us, you’ve been dreaming about your dream wedding since you were at least 12 years old. That’s a lot of time to think about all the magical possibilities that your wedding day could be filled with! When people picture their dream proposal or wedding, there are certain elements that ALWAYS come up. Why is this?! Many wedding practices and rituals are based on ancient folklore or tall tales! Ever curious as to why some elements have stood the test of time? 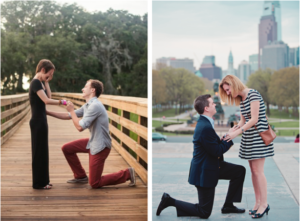 Get Down On One Knee To Propose
The fairytale dream moment of having the love of your life kneel in front of you and ask you to be theirs forever has been around for a looong time! It is a very simple gesture with an important significance. Kneeling before you, asking for your eternal love, is a chivalrous sign of respect. It symbolizes honour, humility, love and respect for the one you are devoting your life to! 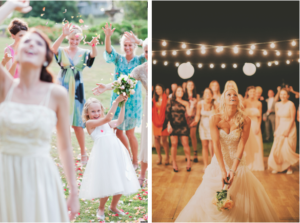 Bouquet Toss
Back in the day, getting married was one of the biggest and best accomplishments that a woman could have. Today, it is still a celebration, nonetheless, but to a much lesser extent. Since brides were held on a pedestal, everyone wanted the good luck that supposedly came along with grabbing a piece of the bridal dress or veil. To avoid any damage to the bride or her dress, pieces of the veil were cut up and put in her bouquet, which would then be tossed into the crowd. The woman who managed to catch the bouquet was said to be #blessed with good luck! Today, we even go as far as saying that the woman who catches the bouquet will be the next one to get married! 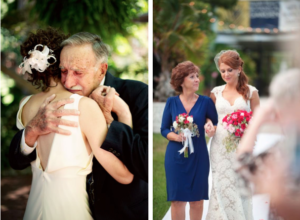 Dad Walking Bride Down The Aisle
This important ritual became so long lasting as a symbol of a father “giving away” his daughter to the care and protection of a new man. Today, it is similar, but we also interpret this tradition as more of an indicator of the relationship between the father and the bride. It signifies the blessing and support that a father gives his daughter for her marriage. For this reason, it is also more and more common to have both parents, a grandparent or another very close relative walk down the aisle with the bride. There’s more than enough love and support to go around!

Hopefully we have revealed some truths behind these traditions and you remember these stories when you are choosing the traditional (or non-traditional!) elements of your wedding!

Check back next week for Part Two of our Wedding Traditions Debunked series! Happy Planning!